Played my first games with skorne last night using the pMorghoul from my last post!

First one was against the soon to be released eAbby!

All I can say about this one is that conferred rage on legion beasts is scary and flying Carniveans even more so! My opponent was fairly new however and underestimated just how far my heavies could go and I caught his angel out with an abused, pain driven, rushed, admonitioned BB. Left is on about 8 health however after some pretty shocking dice! The Incindiarii proved their worth setting more or less the entire board on fire. 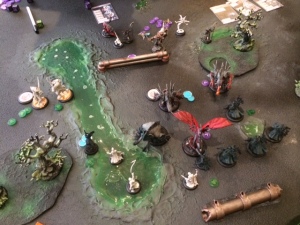 Abby feated the turn after and the angel pushed the BB away before making a b-line for Morghoul. Luckily he landed in admonition ranged so the BB admonitioned round and counter-charged…leaving the angel on 1hp…At least I stopped it boosting so it failed to do anything to Morghoul. The Carnivean came up and ate the gladiator but it didn’t matter that much.

Next turn the BB train-wrecked his way through the Carnivean and the Ravagore whilst Morghoul finished off the angel and feated to keep Abby in check. Zaadesh & co moved up to threaten her at which point my opponent conceded.

The last thing I wanted was Morghoul set on fire at the beginning of the game so I advanced cautiously and…the first Judicator shot scattered straight onto him…bugger. Zaadesh advanced up the flank with his beasts and was met by mini-feated zealots so the savages went in to jam them up as much as possible and did an admirable job at that, killing all of them with the help of zaadesh the turn after. The Incindiarii on the other flank set Rhoven and his gang on fire and did quite a few points to the book. The game swung in my favour when the Judicator failed a charge on my Gladiator due to the objective in front of it that forced it to move at an angle, leaving it just out of reach. Feora moved up behind to make sure no fires would go out. 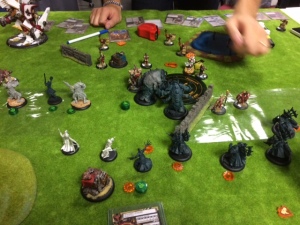 The blast template is where the Judicator was 😉

I started my next turn how I started most of my turns this game, transferring fire damage off Morghoul. He then ran up and poked a number of Zealots who were blocking the BB’s charge route to the Colossal but I couldn’t cast abuse nor admonition due to that silly book, so I just sprinted back to a good position. The Incinidarii finished off the book after but I cursed myself for not activating them first! The BB and Gladiator got enraged and the former charged in only to leave the Colossal on 5 health L Luckily the Gladiator was there to finish it off but if I could of scrapped Judy then the gladiator would have been able to charge over the wreckage and deck Fiora, oh well!

As it stood I had Morghoul hanging out on 3 transfers. Rhoven removed one, a janky spray from the Repenter removed the other but Feora couldn’t reach Morghoul and my opponent conceded.

A  good start for the Skorne. Everything seems to be performing more or less as I wanted it too but more testing is needed! The most important thing I learnt was: I didn’t Feat in either of these games. I could of and should of in order to keep Morghoul safe and not just keep it in reserve to protect my beasts!

That aside I will remember to take more pics next time too!

Until then I best get back to the painting table!

Let me know what you think! Cancel reply